10 skyscrapers that will change London’s skyline

If you’ve been to London recently, you will have noticed something when you look up… cranes, lots of cranes! This is because there are a record number of skyscrapers under construction in London. As London’s commercial occupier base becomes more dynamic, with more and more SMEs and media companies choosing the city as their home – there is unprecedented demand for bigger, better and more exclusive buildings to work, live and play in.

Unite People have successfully recruited construction professionals for clients working on many of these challenging projects.

Here’s 10 of our favourite buildings currently under construction, or due to start imminently...... 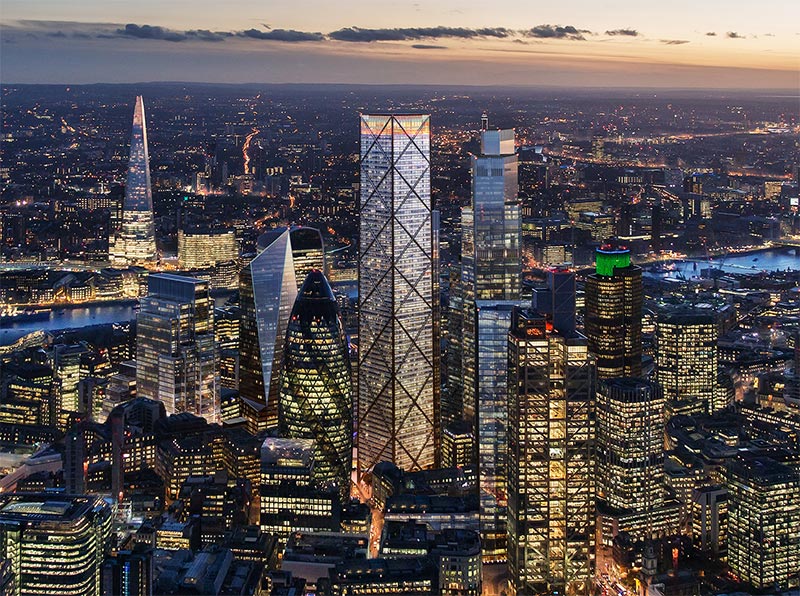 Known as 1 Undershaft, and nicknamed the Trellis, the 73-storey building will be the second-tallest building in western Europe, after the Shard, at more than 300 metres once completed. As well as providing 130,000 square metres of office accommodation and more than 2,000 square meters of retail space, the public viewing gallery at the top of the building will also host London’s highest restaurant.  The top floor will also host learning spaces for schools and other groups to discover more about the capital, its growth and history.

The skyscraper, with estimated construction costs well into the hundreds of millions, is being built on the site of the Aviva Tower, and is due to be completed in the early 2020s.

Rising 50 storeys (163m/535 ft) and designed by award winning SimpsonHaugh & Partners Architects, One Blackfriars promises to add a new dimension to London's skyline. Informally known as “The Vase” due to its shape, the tower’s shimmering surface and the absence of any other completed skyscrapers in the immediate vicinity should ensure it becomes one of the most noticeable in the London skyline over the next few years. When completed the tower will stand more than three times the height of the neighbouring Oxo Tower.

Providing 274 private flats along with a public viewing lounge on the 32nd floor, the site topped out in spring 2017 and is set for completion in 2018.

22 Bishopsgate is a commercial skyscraper under construction in London, which will occupy a prominent site in the heart of London’s financial district.  The TwentyTwo Tower is set to stand 278 m (912 ft) tall with 62 storeys, mixing office space with restaurants and shops, and it will also be the highest free-to-visit public space in London.

The new skyscraper was designed by PLP Architecture, but originally it was supposed to be home to the Pinnacle skyscraper, which was granted planning permission back in 2006.

Construction of the Pinnacle skyscraper was stopped in 2011 as a result of the financial crisis, with the site left empty for years.. However, as of 2015, the construction of 22 Bishopsgate began, building upon the foundations and dug-out basement of the original Pinnacle building. The new City skyscraper is now set for completion in 2019.

The “Toast rack” is a project at 60-70 St Mary Axe planned to include more than 277,570 sq ft of offices over 24 floors. With the designs taking inspiration from the 'neo-gothic' architecture featured in Tim Burton's Batman and Christopher Nolan's The Dark Knight, the planned office development will comprise of 10 'vertical slices', ranging from seven to 34-storeys high in London's financial district, costing an estimated £391m.

With demolition work on the existing buildings on the plot near Lloyd’s of London starting earlier this year, the tower is scheduled to be completed in 2022.

The vision for the regeneration of 250 City Road, a triangular site between Angel and Old Street Stations, is to transform a low density 1980s business park into a high-density, low energy residential community. The scheme includes two residential towers of 43 and 36 storeys that are planned to contribute to the area’s wider development strategy by concluding a planned cluster of high-rise buildings, while providing a distinctive new landmark for Islington.  Due to be completed in 2022, the tallest tower will reach 150m. 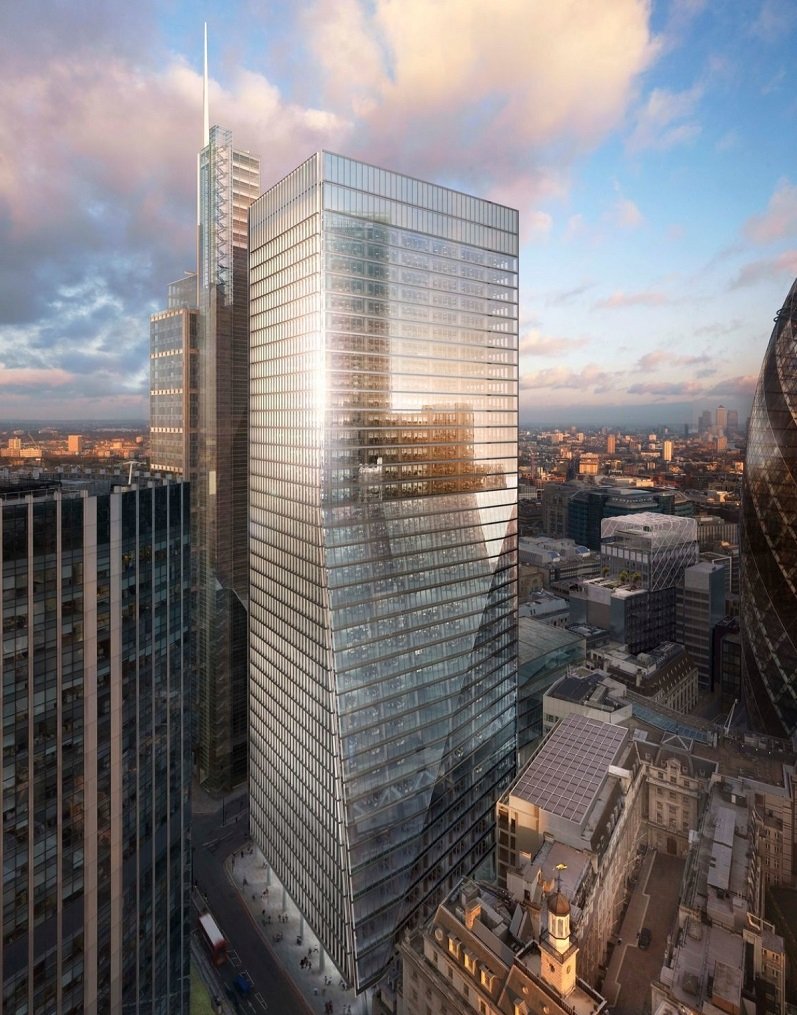 Conceived way back in 2006, construction on the £1 billion 100 Bishopsgate tower project began in 2015, with developers Brookfield so confident in London's financial district, that building began without the company securing any tenants! However, by November of 2015 the gamble had paid off, with leases quickly agreed on about 70 per cent of the 900,000-square-foot building, which also has retail and restaurant space available.

The two-acre site is situated on the eastern edge of London's financial district, a short walk from Bank and Liverpool Street stations and whilst not the tallest building in the City of London, upon completion it will be the largest single building in the City. The development is comprised of a 40-storey tower and a seven-storey podium, which includes a green roof terrace on level six.  Originally set to be six floors taller (it was reduced following concerns it would detract from 30 St Marys Axe and the Heron Tower) 100 Bishopsgate is currently scheduled to be completed later this year.

The “Can of Ham” office building was first proposed way back in 2008 but hit continued delays during the financial crisis.

With construction finally beginning in 2015, the tower will eventually stand at 90 metres tall, meaning it is one of the shorter current skyscraper developments.  However the £100m project will almost certainly develop into one of the capital's landmarks due to it’s distinctive shape. Foggo Associates designed the arched profile of the tower to respect existing views through the City of London, as Richard Rogers famously did when he designed the shape of the Leadenhall Building, also known as the Cheesegrater, for the same reasons.

The 24-storey building is due to be completed in 2018 and will be a welcome addition to the city's other food-themed structures like the Gherkin, and the aforementioned Cheesegrater! 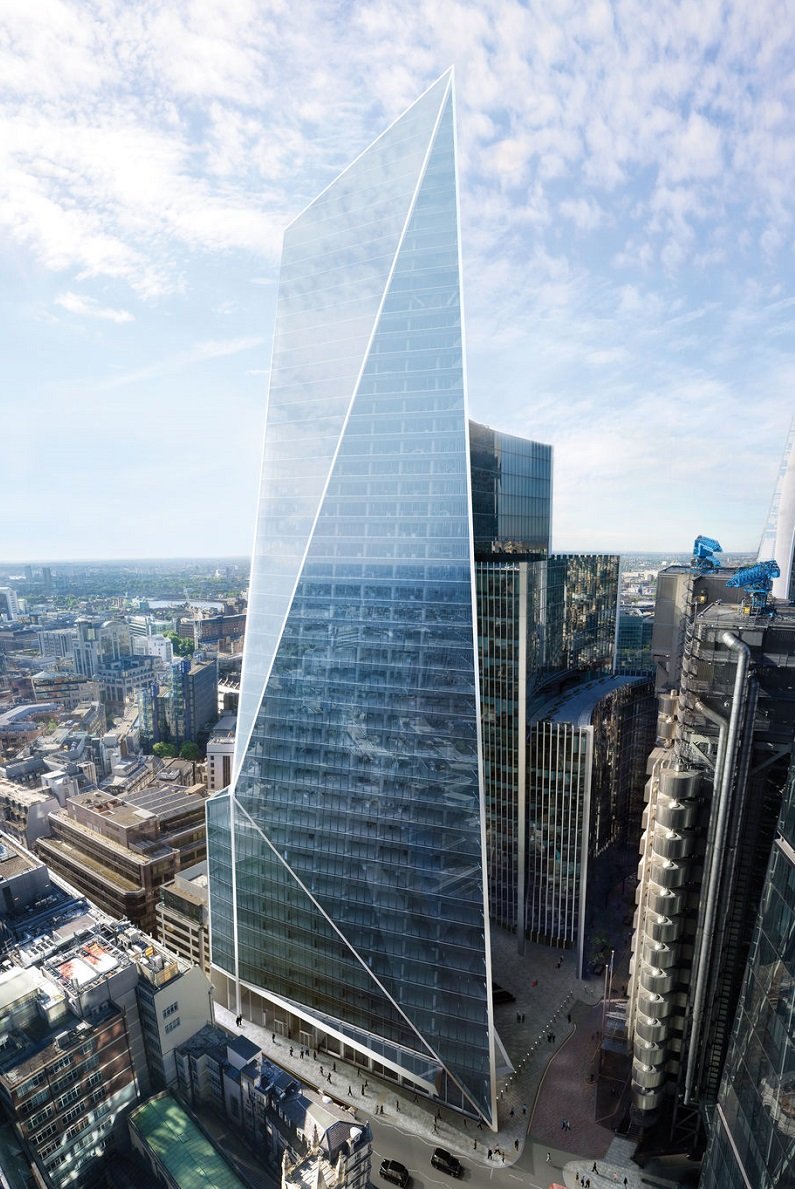 Neighbouring the Gherkin, the Scalpel will provide approximately 37,000sqm of office accommodation over 35 office floors, plus shops and restaurants, with construction costs estimated at £500m.

Designed by Kohn Pedersen Fox (KPF), the tower at 52 Lime Street will be 190m tall, with 35 floors of offices above ground and additional mezzanine levels, the project also includes a public square which leads onto the area shared by the Lloyd's of London and Willis buildings.

The "Scalpel" — starting construction in 2015 and due for completion in 2018 — was designed as a visual counterpart to the neighbouring Cheesegrater building and is slanted in order to not disturb the closely guarded view of St Paul's Cathedral. 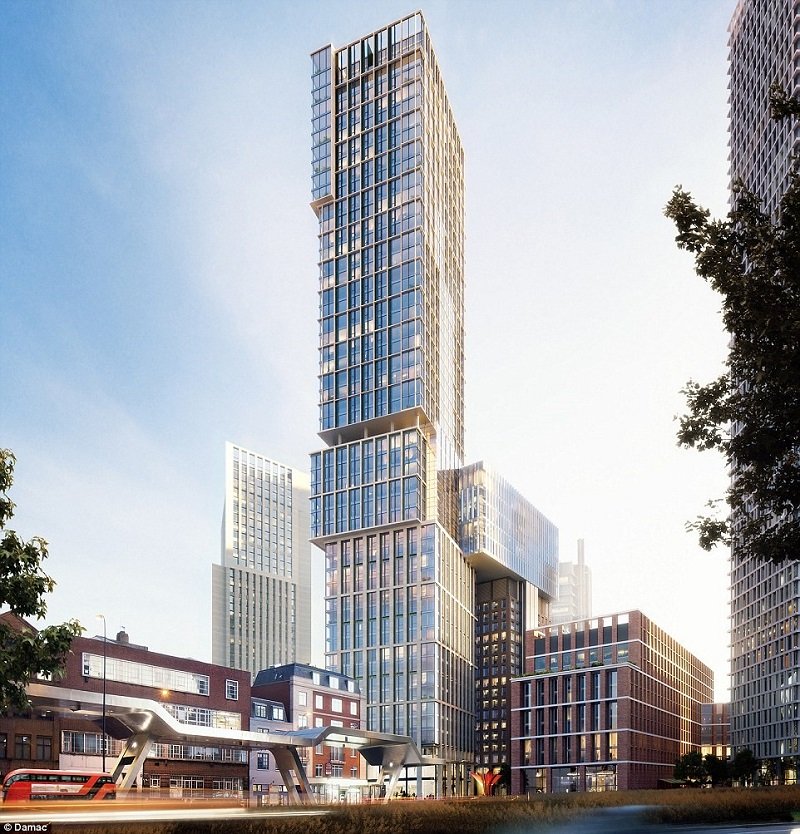 The £240m AYKON London One tower, dubbed the “Jenga Tower” due to it’s distinctive stepped design.  Standing at 178.5m above ground level (about the same height as the Gherkin) it will be located to the south of Blackfriars Bridge, opposite the boomerang-shaped One Blackfriars, which is currently under construction.

The 50-storey residential tower will be part of a wider mixed-use development, including a smaller office tower, as well as further blocks for 'affordable' housing and leisure/retail and is scheduled for completion in mid-2020.

The Spire, previously known as Hertsmere House, is a construction project located in West India Quay, near Canary Wharf.  The 67-storey tower will be the same height as Canary Wharf's tallest skyscraper — the office building One Canada Square — and will become Europe's tallest residential skyscraper.  It has already earned a nickname — the Flower Tower — because of its unique shape, with Architects Larry Malcic and Christopher Colosimo basing their design on an orchid.

Demolition work in Canary Wharf for the Spire began in September 2016, and the tower is set for completion in 2020, at an estimated cost of £800m.

At Unite People, we specialise in the recruitment of construction professionals. We recruit on behalf the construction industry’s top employers, for some of the UK’s most prestigious projects.

If you’re a construction professional considering your career options, please contact us for free professional advice.

All of our recruitment consultants have extensive experience within their field of expertise, so you can be assured you’ll receive a market-leading service right from your first conversation, through the whole recruitment process and ending with excellent aftercare as you begin work in your new position.